This is the B1 battle droid, from the Star Wars prequels. Ever since I saw Phantom Menace as a kid, I’ve liked these spindly boys. They aren’t very intimidating - in the films and games, they’re used primarily as mass cannon fodder. But something about their voice and mannerisms has always seemed endearing to me. 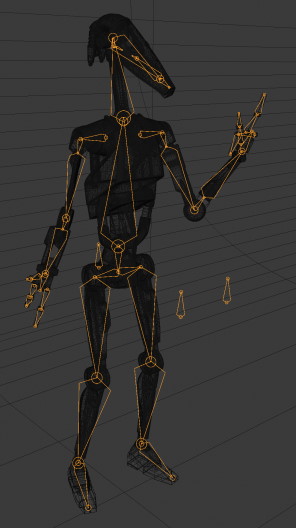 I made this model as an exercise in working from reference, hard-surface modeling, and most of all, rigid rigging. When it came to rigging, any references I could find came short of the mark. I already have little experience with rigging, so I had to fill in the gaps while learning as I go.

In movies and games, the B1’s joints are generally not shown in detail. While the visible mechanisms would indicate a severely limited range of motion, the droids carry on bending in whatever way necessary for the scene. It seems that, as long as no clipping is visible, anything goes. So the more limited motion on my rig is an artistic choice: I’m just not satisfied with simply obscuring the mechanism.

Observe the slideshow above: the first two images demonstrate the double-hinged piston on the neck in an extended and contracted position. The third and fourth images show the arms rotation action: the shoulders only rotate on one axis, so the arm rotates on the perpendicular axis directly below the shoulder.

This model isn’t perfect and there are still improvements I’d like to make, but I’m happy with where it is so far.